Python "extend" for a dictionary

What is the best way to extend a dictionary with another one while avoiding the use of a for loop? For instance:

Will add keys and values from b to a, overwriting if there’s already a value for a key.

A beautiful gem in this closed question:

The “oneliner way”, altering neither of the input dicts, is

In case of conflict, the items from basket_two will override the ones from basket_one. As one-liners go, this is pretty readable and transparent, and I have no compunction against using it any time a dict that’s a mix of two others comes in handy (any reader who has trouble understanding it will in fact be very well served by the way this prompts him or her towards learning about dict and the ** form;-). So, for example, uses like:

are reasonably frequent occurrences in my code.

Note: In Python 3, this will only work if every key in basket_two is a string.

As others have mentioned, a.update(b) for some dicts a and b will achieve the result you’ve asked for in your question. However, I want to point out that many times I have seen the extend method of mapping/set objects desire that in the syntax a.extend(b), a‘s values should NOT be overwritten by b‘s values. a.update(b) overwrites a‘s values, and so isn’t a good choice for extend.

Note that some languages call this method defaults or inject, as it can be thought of as a way of injecting b’s values (which might be a set of default values) in to a dictionary without overwriting values that might already exist.

Of course, you could simple note that a.extend(b) is nearly the same as b.update(a); a=b. To remove the assignment, you could do it thus:

Thanks to Tom Leys for that smart idea using a side-effect-less dict constructor for extend.

Have you tried using dictionary comprehension with dictionary mapping:

In Python 3.9 you can add two dict using union | operator

You can also use python’s collections.Chainmap which was introduced in python 3.3.

This has a few possible advantages, depending on your use-case. They are explained in more detail here, but I’ll give a brief overview:

This mainly makes it useful for things like configuration dictionaries.

Notice that since python3.9 a much easier syntax was introduced (Union Operators):

In terms of efficiency, it seems faster to use the unpack operation, compared with the update method.

Here an image of a test I did: 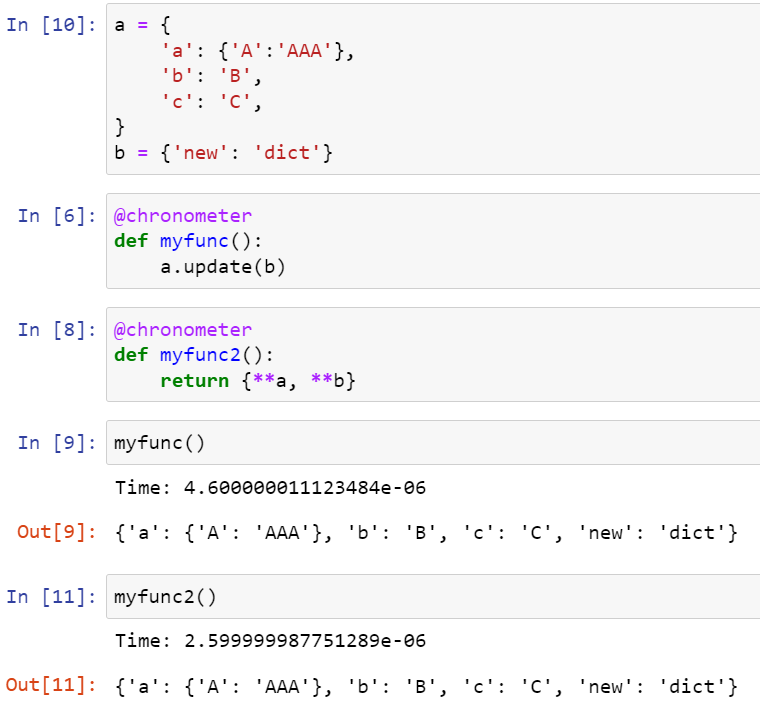