I need an algorithm that can give me positions around a sphere for N points (less than 20, probably) that vaguely spreads them out. There’s no need for “perfection”, but I just need it so none of them are bunched together.

A few other question threads I came across spoke of randomized uniform distribution, which adds a level of complexity I’m not concerned about. I apologize that this is such a silly question, but I wanted to show that I’ve truly looked hard and still come up short.

So, what I’m looking for is simple pseudocode to evenly distribute N points around a unit sphere, that either returns in spherical or Cartesian coordinates. Even better if it can even distribute with a bit of randomization (think planets around a star, decently spread out, but with room for leeway).

Obviously I’m working this in degrees on the surface of the spherical earth, with the usual conventions for translating +/- to N/S or E/W. And obviously this gives you a completely non-random distribution, but it is uniform and the points are not bunched together.

To add some degree of randomness, you could generate 2 normally-distributed (with mean 0 and std dev of {dlat/3, dlong/3} as appropriate) and add them to your uniformly distributed points.

In this example code node[k] is just the kth node. You are generating an array N points and node[k] is the kth (from 0 to N-1). If that is all that is confusing you, hopefully you can use that now.

(in other words, k is an array of size N that is defined before the code fragment starts, and which contains a list of the points).

Alternatively, building on the other answer here (and using Python):

If you plot that, you’ll see that the vertical spacing is larger near the poles so that each point is situated in about the same total area of space (near the poles there’s less space “horizontally”, so it gives more “vertically”).

This isn’t the same as all points having about the same distance to their neighbours (which is what I think your links are talking about), but it may be sufficient for what you want and improves on simply making a uniform lat/lon grid.

with small numbers of points you could run a simulation:

edit: This does not answer the question the OP meant to ask, leaving it here in case people find it useful somehow.

We use the multiplication rule of probability, combined with infinitessimals. This results in 2 lines of code to achieve your desired result:

(defined in the following coordinate system:) 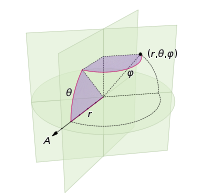 Now we can’t assign θ uniformly, otherwise we’d get clumping at the poles. We wish to assign probabilities proportional to the surface area of the spherical wedge (the θ in this diagram is actually φ):

An angular displacement dφ at the equator will result in a displacement of dφ*r. What will that displacement be at an arbitrary azimuth θ? Well, the radius from the z-axis is r*sin(θ), so the arclength of that “latitude” intersecting the wedge is dφ * r*sin(θ). Thus we calculate the cumulative distribution of the area to sample from it, by integrating the area of the slice from the south pole to the north pole.

We will now attempt to get the inverse of the CDF to sample from it: http://en.wikipedia.org/wiki/Inverse_transform_sampling

First we normalize by dividing our almost-CDF by its maximum value. This has the side-effect of cancelling out the dφ and r.

This is known as packing points on a sphere, and there is no (known) general, perfect solution. However, there are plenty of imperfect solutions. The three most popular seem to be:

A lot more information about this problem can be found here

This works and it’s deadly simple. As many points as you want:

I’m adding this answer as:
— None of the other options fit the ‘uniformity’ need ‘spot-on’ (or not obviously-clearly so). (Noting to get the planet like distribution looking behavior particurally wanted in the original ask, you just reject from the finite list of the k uniformly created points at random (random wrt the index count in the k items back).)
–The closest other impl forced you to decide the ‘N’ by ‘angular axis’, vs. just ‘one value of N’ across both angular axis values ( which at low counts of N is very tricky to know what may, or may not matter (e.g. you want ‘5’ points — have fun ) )
–Furthermore, it’s very hard to ‘grok’ how to differentiate between the other options without any imagery, so here’s what this option looks like (below), and the ready-to-run implementation that goes with it. 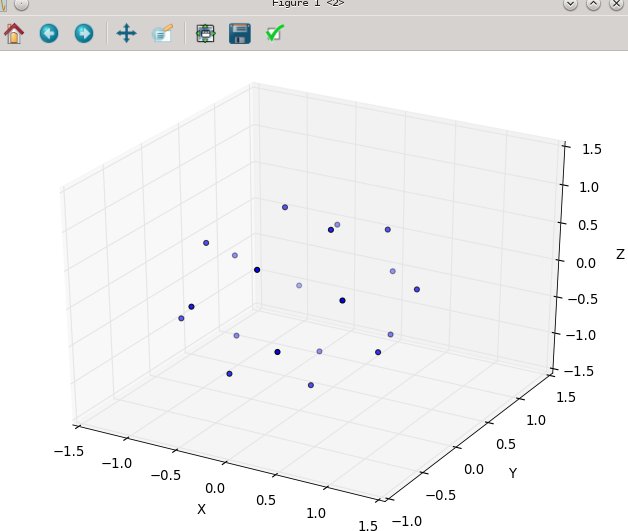 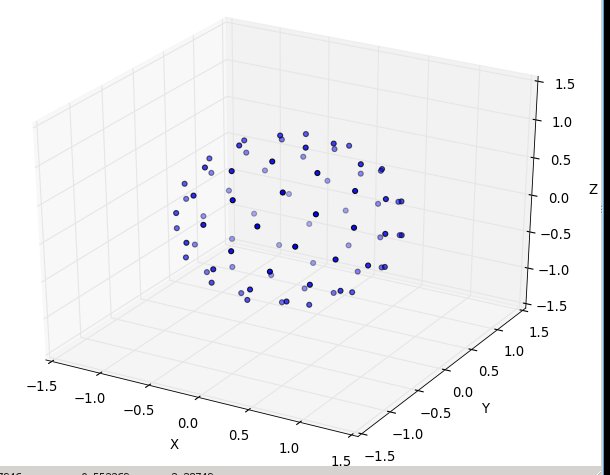 here’s the ready-to-run python3 code, where the emulation is that same source: ” http://web.archive.org/web/20120421191837/http://www.cgafaq.info/wiki/Evenly_distributed_points_on_sphere ” found by others. ( The plotting I’ve included, that fires when run as ‘main,’ is taken from: http://www.scipy.org/Cookbook/Matplotlib/mplot3D )

The above function should run in loop with N loop total and k loop current iteration.

Here is a picture, except I put the camera half way inside the sphere so it looks 2d instead of 3d because the camera is same distance from all points.
http://3.bp.blogspot.com/-9lbPHLccQHA/USXf88_bvVI/AAAAAAAAADY/j7qhQsSZsA8/s640/sphere.jpg

The Fibonacci sphere algorithm is great for this. It is fast and gives results that at a glance will easily fool the human eye. You can see an example done with processing which will show the result over time as points are added. Here’s another great interactive example made by @gman. And here’s a simple implementation in python. 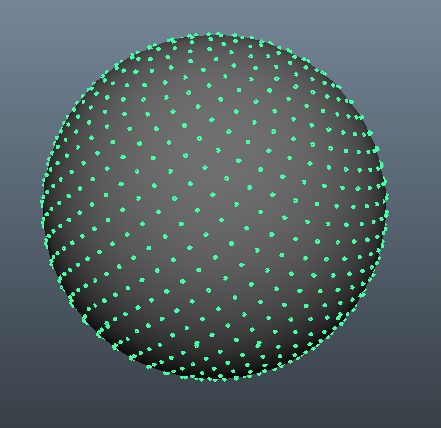 What you are looking for is called a spherical covering. The spherical covering problem is very hard and solutions are unknown except for small numbers of points. One thing that is known for sure is that given n points on a sphere, there always exist two points of distance d = (4-csc^2(pi n/6(n-2)))^(1/2) or closer.

If you want a probabilistic method for generating points uniformly distributed on a sphere, it’s easy: generate points in space uniformly by Gaussian distribution (it’s built into Java, not hard to find the code for other languages). So in 3-dimensional space, you need something like

The Gaussian distribution in n dimensions is spherically symmetric so the projection onto the sphere is uniform.

Of course, there’s no guarantee that the distance between any two points in a collection of uniformly generated points will be bounded below, so you can use rejection to enforce any such conditions that you might have: probably it’s best to generate the whole collection and then reject the whole collection if necessary. (Or use “early rejection” to reject the whole collection you’ve generated so far; just don’t keep some points and drop others.) You can use the formula for d given above, minus some slack, to determine the min distance between points below which you will reject a set of points. You’ll have to calculate n choose 2 distances, and the probability of rejection will depend on the slack; it’s hard to say how, so run a simulation to get a feel for the relevant statistics.

You said you couldn’t get the golden spiral method to work and that’s a shame because it’s really, really good. I would like to give you a complete understanding of it so that maybe you can understand how to keep this away from being “bunched up.”

So here’s a fast, non-random way to create a lattice that is approximately correct; as discussed above, no lattice will be perfect, but this may be good enough. It is compared to other methods e.g. at BendWavy.org but it just has a nice and pretty look as well as a guarantee about even spacing in the limit.

To understand this algorithm, I first invite you to look at the 2D sunflower spiral algorithm. This is based on the fact that the most irrational number is the golden ratio (1 + sqrt(5))/2 and if one emits points by the approach “stand at the center, turn a golden ratio of whole turns, then emit another point in that direction,” one naturally constructs a spiral which, as you get to higher and higher numbers of points, nevertheless refuses to have well-defined ‘bars’ that the points line up on.(Note 1.)

The algorithm for even spacing on a disk is, 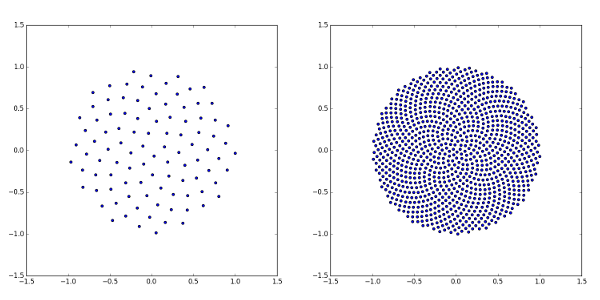 Well, I am using the square root here because I want these to have even-area spacing around the disk. That is the same as saying that in the limit of large N I want a little region R ∈ (r, r + dr), Θ ∈ (θ, θ + dθ) to contain a number of points proportional to its area, which is r dr dθ. Now if we pretend that we are talking about a random variable here, this has a straightforward interpretation as saying that the joint probability density for (R, Θ) is just c r for some constant c. Normalization on the unit disk would then force c = 1/π.

Now let me introduce a trick. It comes from probability theory where it’s known as sampling the inverse CDF: suppose you wanted to generate a random variable with a probability density f(z) and you have a random variable U ~ Uniform(0, 1), just like comes out of random() in most programming languages. How do you do this?

Now the golden-ratio spiral trick spaces the points out in a nicely even pattern for θ so let’s integrate that out; for the unit disk we are left with F(r) = r2. So the inverse function is F-1(u) = u1/2, and therefore we would generate random points on the disk in polar coordinates with r = sqrt(random()); theta = 2 * pi * random().

Now instead of randomly sampling this inverse function we’re uniformly sampling it, and the nice thing about uniform sampling is that our results about how points are spread out in the limit of large N will behave as if we had randomly sampled it. This combination is the trick. Instead of random() we use (arange(0, num_pts, dtype=float) + 0.5)/num_pts, so that, say, if we want to sample 10 points they are r = 0.05, 0.15, 0.25, ... 0.95. We uniformly sample r to get equal-area spacing, and we use the sunflower increment to avoid awful “bars” of points in the output.

Now doing the sunflower on a sphere

The changes that we need to make to dot the sphere with points merely involve switching out the polar coordinates for spherical coordinates. The radial coordinate of course doesn’t enter into this because we’re on a unit sphere. To keep things a little more consistent here, even though I was trained as a physicist I’ll use mathematicians’ coordinates where 0 ≤ φ ≤ π is latitude coming down from the pole and 0 ≤ θ ≤ 2π is longitude. So the difference from above is that we are basically replacing the variable r with φ. 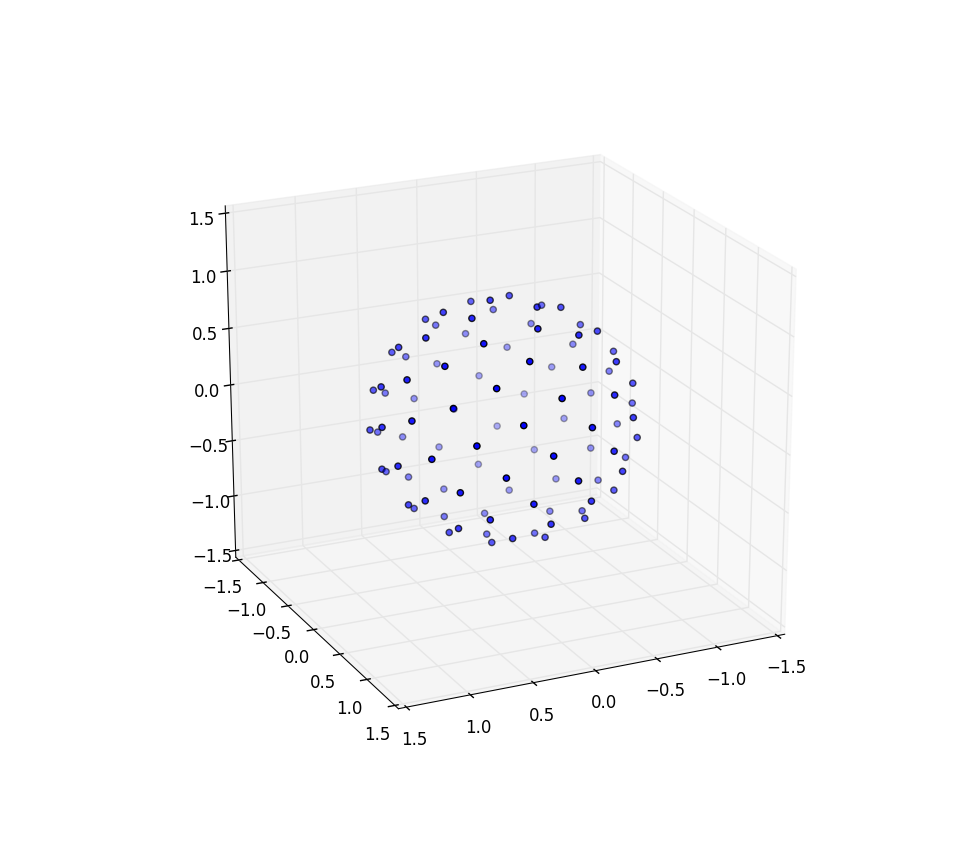 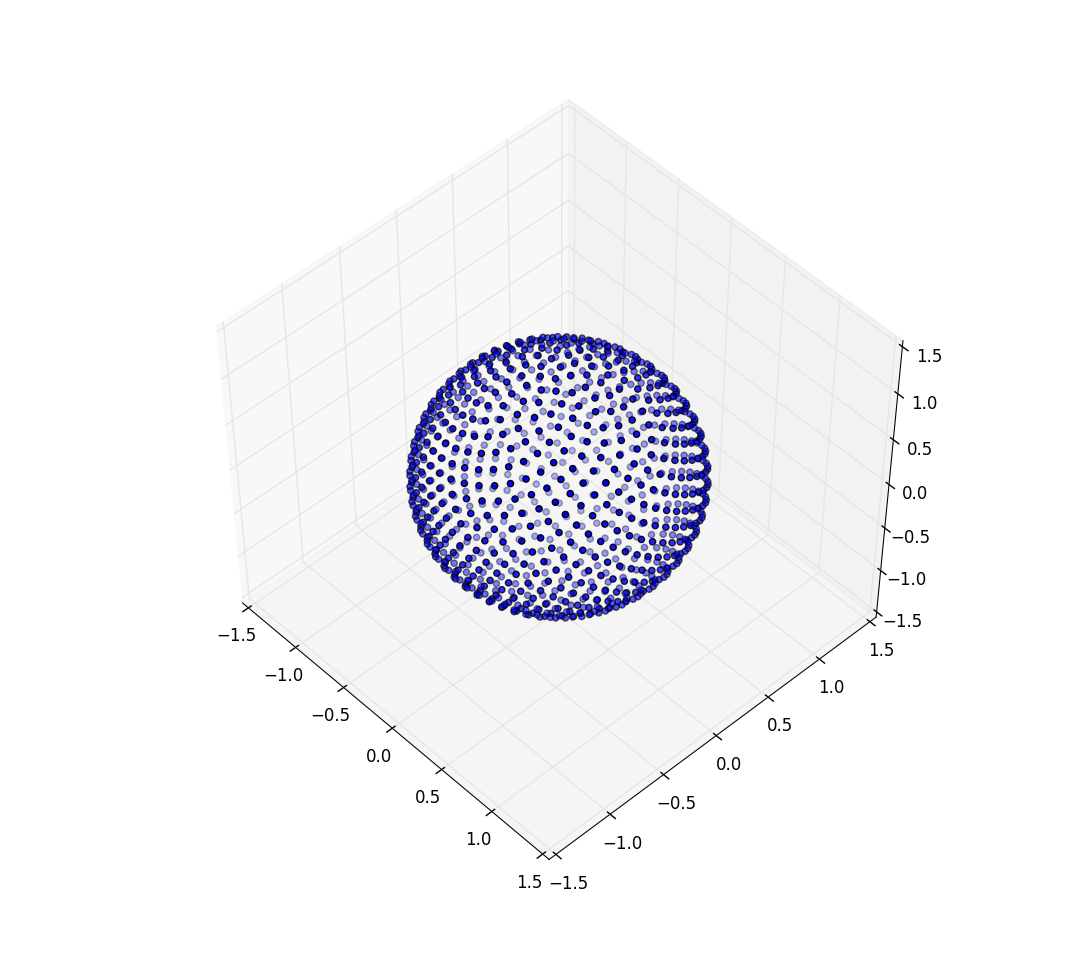 I wanted to give a shout out to Martin Roberts’s blog. Note that above I created an offset of my indices by adding 0.5 to each index. This was just visually appealing to me, but it turns out that the choice of offset matters a lot and is not constant over the interval and can mean getting as much as 8% better accuracy in packing if chosen correctly. There should also be a way to get his R2 sequence to cover a sphere and it would be interesting to see if this also produced a nice even covering, perhaps as-is but perhaps needing to be, say, taken from only a half of the unit square cut diagonally or so and stretched around to get a circle.

It’s probably overkill, but maybe after looking at it you’ll realize some of it’s other nice properties are interesting to you. It’s way more than just a function that outputs a point cloud.

@robert king It’s a really nice solution but has some sloppy bugs in it. I know it helped me a lot though, so never mind the sloppiness. 🙂
Here is a cleaned up version….

Based on fnord’s answer, here is a Unity3D version with added ranges : 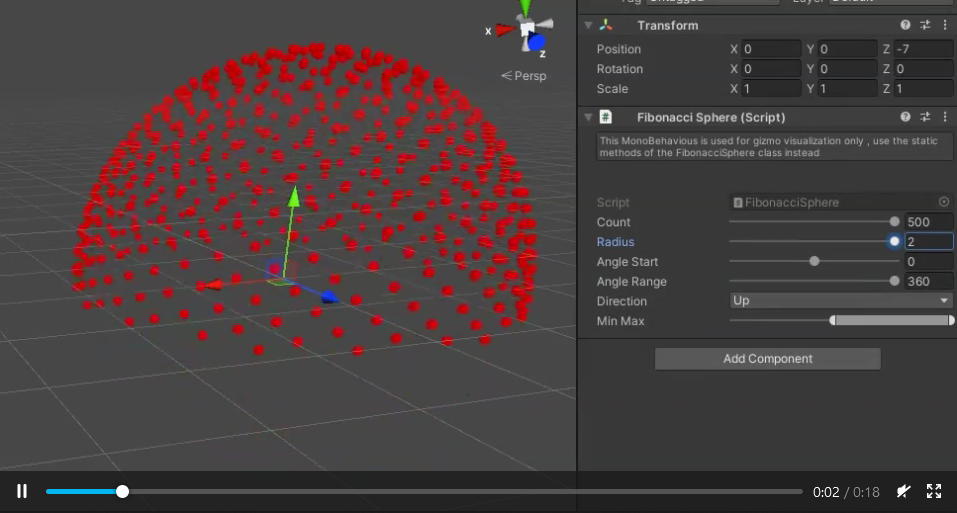