How do I count the occurrences of a list item?

Given a single item, how do I count occurrences of it in a list, in Python?

A related but different problem is counting occurrences of each different element in a collection, getting a dictionary or list as a histogram result instead of a single integer. For that problem, see Using a dictionary to count the items in a list.

If you only want a single item’s count, use the count method:

Important: this is very slow if you are counting multiple different items

Each count call goes over the entire list of n elements. Calling count in a loop n times means n * n total checks, which can be catastrophic for performance.

If you want to count multiple items, use Counter, which only does n total checks.

list.count(x) returns the number of times x appears in a list

Use Counter if you are using Python 2.7 or 3.x and you want the number of occurrences for each element:

To count the number of diverse elements having a common type:

Another way to get the number of occurrences of each item, in a dictionary:

I had this problem today and rolled my own solution before I thought to check SO. This:

is really, really slow for large lists. My solution

is actually a bit faster than the Counter solution, at least for Python 2.7.

Counting the occurrences of one item in a list

Counting the occurrences of all items in a list is also known as “tallying” a list, or creating a tally counter.

Counting all items with count()

Counting all items with Counter()

Alternatively, there’s the faster Counter class from the collections library

How much faster is Counter?

I checked how much faster Counter is for tallying lists. I tried both methods out with a few values of n and it appears that Counter is faster by a constant factor of approximately 2.

Here is the script I used:

Given an item, how can I count its occurrences in a list in Python?

This works fine for any list. Tuples have this method as well:

And then there’s collections.Counter. You can dump any iterable into a Counter, not just a list, and the Counter will retain a data structure of the counts of the elements.

Counters are based on Python dictionaries, their keys are the elements, so the keys need to be hashable. They are basically like sets that allow redundant elements into them.

You can add or subtract with iterables from your counter:

And you can do multi-set operations with the counter as well:

There are good builtin answers, but this example is slightly instructive. Here we sum all the occurences where the character, c, is equal to 'b':

Not great for this use-case, but if you need to have a count of iterables where the case is True it works perfectly fine to sum the boolean results, since True is equivalent to 1.

Why not use pandas?

Pandas is a common library, but it’s not in the standard library. Adding it as a requirement is non-trivial.

There are builtin solutions for this use-case in the list object itself as well as in the standard library.

If your project does not already require pandas, it would be foolish to make it a requirement just for this functionality.

Answered By: Russia Must Remove Putin

You can also use countOf method of a built-in module operator.

Why not using Pandas?

If you are looking for a count of a particular element, say a, try:

This will return the amount of occurences of your_value

I’ve compared all suggested solutions (and a few new ones) with perfplot (a small project of mine).

For large enough arrays, it turns out that

is slightly faster than the other solutions. 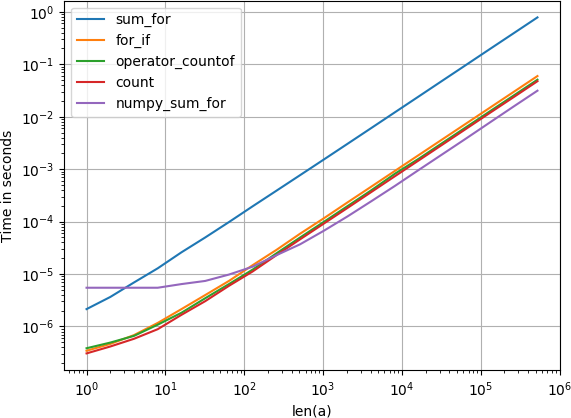 is what you want. 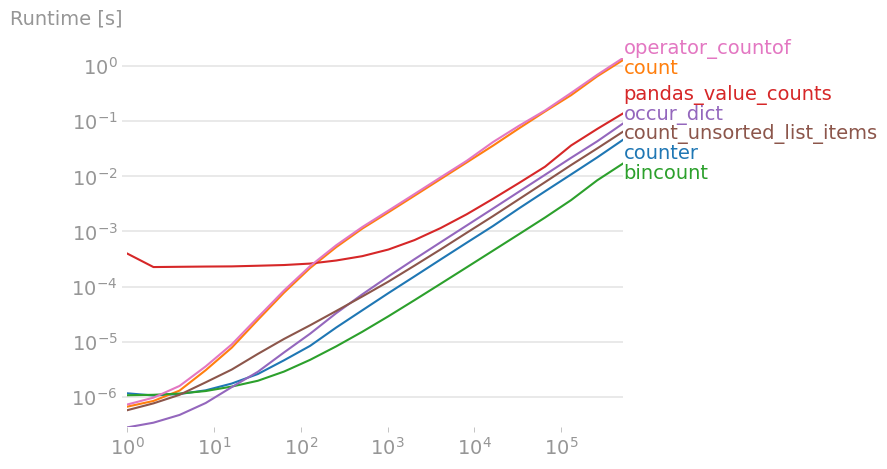 Code to reproduce the plots:

If you can use pandas, then value_counts is there for rescue.

It automatically sorts the result based on frequency as well.

May not be the most efficient, requires an extra pass to remove duplicates.

or return as dict :

if you want a number of occurrences for the particular element:

It was suggested to use numpy’s bincount, however it works only for 1d arrays with non-negative integers. Also, the resulting array might be confusing (it contains the occurrences of the integers from min to max of the original list, and sets to 0 the missing integers).

and then we can pair them as

It also works with other data types and “2d lists”, e.g.

Count of all elements with itertools.groupby()

Antoher possiblity for getting the count of all elements in the list could be by means of itertools.groupby().

Notice how it combined the first three a‘s as the first group, while other groups of a are present further down the list. This happens because the input list L was not sorted. This can be a benefit sometimes if the groups should in fact be separate.

Note: For creating unique counts, many of the other answers provide easier and more readable code compared to the groupby solution. But it is shown here to draw a parallel to the duplicate count example.

Below are the three solutions:

Fastest is using a for loop and storing it in a Dict.

Although it is very old question, since i didn’t find a one liner, i made one.

I would use filter(), take Lukasz’s example:

The dictionary which shows i: frequency(i) for elements of this list is:

use %timeit to see which operation is more efficient. np.array counting operations should be faster.

Alternatively, you can also implement the counter by yourself. This is the way I do:

then you can use df_counts.index and df_counts.values to get the data.

Created a list of names wherein the name ‘Jack’ is repeated.
In order to check its Occurrence, I ran a for loop in the list named x.
Upon each iteration, if the loop variable attains the value same that of received from the user and stored in the variable the_item, the variable how_many_times gets incremented by 1.
After attaining some value…We print how_many_times which stores the value of the occurance of the word ‘jack’

For this topic I know the below six ways by which you can count the number of occurrences of the element in the list:

count() is the in-built function by which python count occurrences in list. It is the easiest among all other methods used to count the occurrence. Count() methods take one argument, i.e., the element for which the number of occurrences is to be counted.

Operator module from python library consists of countof() method which helps to return the number of occurrence of the element from the lists. This method takes two arguments, i.e., the list in which the count needs to be performed and the element which needs to be found. Moreover, you have to import the operator module before beginning the program using the import keyword as shown below:

Python possesses an in-built module named collections, including multiple methods to ease your programming. One such method is a counter() method where elements are stored as a dictionary with keys and counts as values.

Therefore, the counter() method helps you return the total number of occurrences of a given element inside the given list by taking one parameter as the list in which the element is to be counted. Remember that you have to import the collections module to use the counter() method as shown in the below example:

Pandas is the in-built python library, highly popular for data analysis and data manipulation. It is an open-source tool with a large range of features and is widely used in the domains like machine learning and artificial intelligence.

To count the occurrence of elements using pandas, you have to convert the given list into the series and then use the value_count() method, which returns the object in descending order. By these, you can easily note that the first element is always the most frequently occurring element.

6) Using loops and dict in python

This is the most traditional method by which python count occurrences in the list that is by using the loop, conditional statement, and dictionaries. By this method, you have to create the empty dictionary and then iterate over the list. Later, check if the element present in the list is available in the dictionary or not. If yes, then increase its value by one; otherwise, introduce a new element in the dictionary and assign 1 to it. Repeat the same process until all the elements in the lists are visited.

Remember that this method is quite different from the previous method using the loop and the counter variable. The early mentioned method does not make use of dictionary data structure, whereas this one does. At last, print the count of occurrence of each element as shown in the below example: