I’m having trouble getting command line arguments passed to Python programs if I try to execute them directly as executable commands from a Windows command shell. For example, if I have this program (test.py):

I think I solved this. For some reason there is a SECOND place in the registry (besides that shown by the file associations stored in HKEY_CLASSES_ROOTPython.Fileshellopencommand):

This seems to be the controlling setting on my system. The registry setting above adds the “%*” to pass all arguments to python.exe (it was missing in my registry for some reason).

My setting was under yet another registry key, HKEY_CLASSES_ROOTpy_auto_file. The other keys mentioned also existed, but Windows was using this one for some reason.

For Python 3.3 on Windows 7, my setting was under another registry key; the key I changed to make the arguments get passed was

I had several (at least five) other keys with the value "C:PythonPython33python.exe" "%1", but this is the one I changed that made it work.

To make it working for me, I had to use the registry path:

Your program associations for .py files might be messed up. Just re-associate .py files with your python executable.

I checked all registry keys with python.exe and py_auto_file and made them point to my current python installation including th %* at the end that passes arguments. They were quite a few:

But that didn’t do the job for me. I had to change my default python application as well. 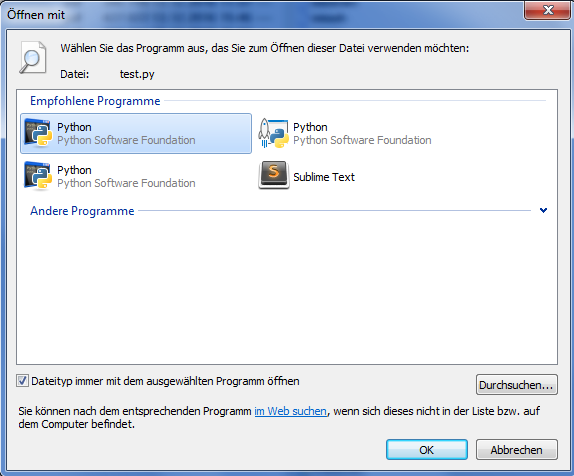 As one can see I have 3 Python versions installed. It is impossible to see which is which here so I tried all three of them as my default python application. Eventually I was able to get my script arguments with one of these three.

By looking through the Windows registry, I found all the places where anything like
Python36pythonw.exe "%1" %* appears.

When I type python app.py args at the command prompt, everything works properly.

When I use just the app name (app.py args) Windows opens app.py in Python, but the app fails when it tries to access argv[1], because len(argv) is 1.

Apparently Windows knows enough to pass a py file to Python, but I can’t figure out from looking at registry entries how it constructs the command. It appears to be using "%1" rather than "%1" %*.

If fixed this on my Windows 10 system by editing the following registry keys:

A lot of thanks for the most of other answers for helping me to find the solution!

My case was to open .py-files with py.exe (not python.exe directly), this case it noted in a couple of comments, but I decided to post this as a separate answer to emphasize the difference.

So I have my .py-files associated with C:Windowspy.exe and in C:Windowspy.ini config I have a couple of shebang definitions

And on Microsoft Windows 7 [Version 6.1.7601] my python script did NOT received the args like this

but this worked fine

I’ve tried much of registry changes, but the last helped was the following change (saved to a .reg-file and run). I’ve found this registry key searching "%1" string with initial value "C:Windowspy.exe" "%1" and added %* in the end as other answers note:

For information, before I tried to setup these keys and values and did not helped (at least before the noted above):