Seems as though an update on Windows 10 overnight broke Python. Just trying to run python --version returned a “Permission Denied” error. None of the three updates; KB4507453, KB4506991, or KB4509096 look like they’d be the culprit but the timing of the issue is suspicious. Rather than messing with rolling back, I’m hoping there’s a simpler fix that I’m missing.

The permissions on python are “-rwxr-xr-x” and I haven’t changed anything besides letting the Windows update reboot machine after installing last night’s patches.

Should also note that this is happening whether I (try) to execute Python from git-bash using “run as administrator” or not, and if I try using PowerShell, it just opens the Windows store as if the app isn’t installed so I’m thinking it can’t see the contents of my /c/Users/david/AppData/Local/Microsoft/WindowsApps/ folder for some reason.

I’ve also tried to reinstall Python 3.7.4, but that didn’t help either. Is there something else I should be looking at?

It’s not a solution with PowerShell, but I had the same problem except with MINGW64. I got around it by switching to Windows Subsystem for Linux (which I wanted to do anyways) as my terminal, just generally and in VSCode. This post describes it well:

4) In VSCode change “terminal.integrated.shell.windows” to “C:WINDOWSSystem32bash.exe” (for further details see the post above)

Running smoothly now in VSCode and WSL (Bash on Ubuntu on Windows). Might be at least a temporary solution for you.

May be you can try opening command prompt with Administrator privileges. (Run As Administrator). Works for me most of the time.

As far as I can tell, this was caused by a conflict with the version of Python 3.7 that was recently added into the Windows Store. It looks like this added two “stubs” called python.exe and python3.exe into the %USERPROFILE%AppDataLocalMicrosoftWindowsApps folder, and in my case, this was inserted before my existing Python executable’s entry in the PATH.

Moving this entry below the correct Python folder (partially) corrected the issue.

The second part of correcting it is to type manage app execution aliases into the Windows search prompt and disable the store versions of Python altogether. 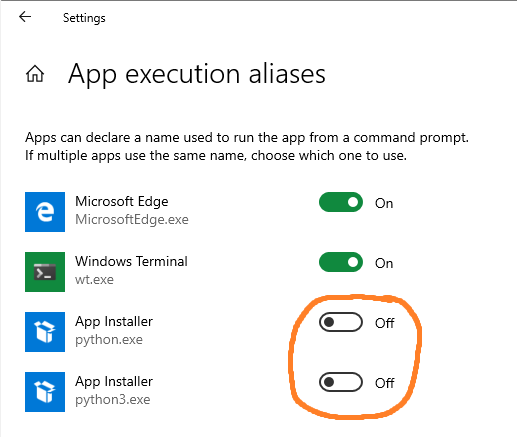 It’s possible that you’ll only need to do the second part, but on my system I made both changes and everything is back to normal now.

All of the files in %USERPROFILE%AppDataLocalMicrosoftWindowsApps are placeholders that point to files that are actually located somewhere in C:Program FilesWindowsApps, which happens to be denied permissions completely.

It appears I was on the right track with my statement made in my duplicate of this problem:

“Seems like they didn’t really think about the distribution method screwing with permissions!”

Permissions are screwed up royally because of the WindowsApps distribution method: 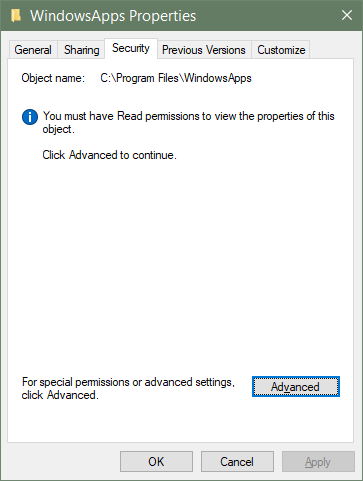 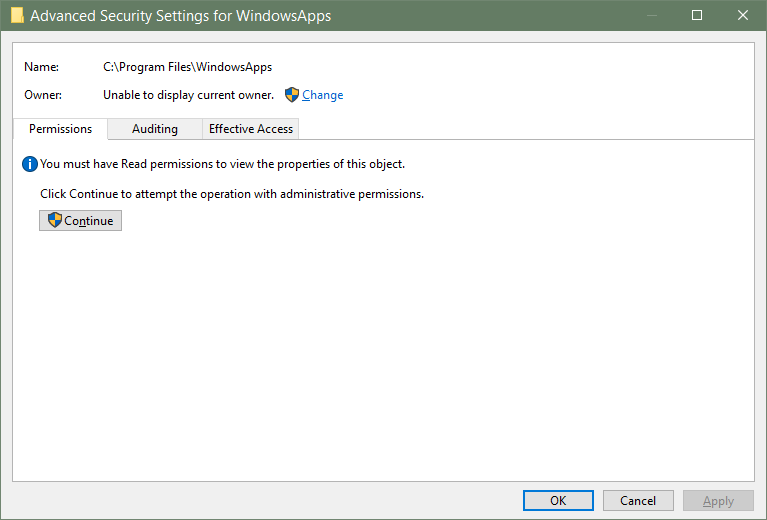 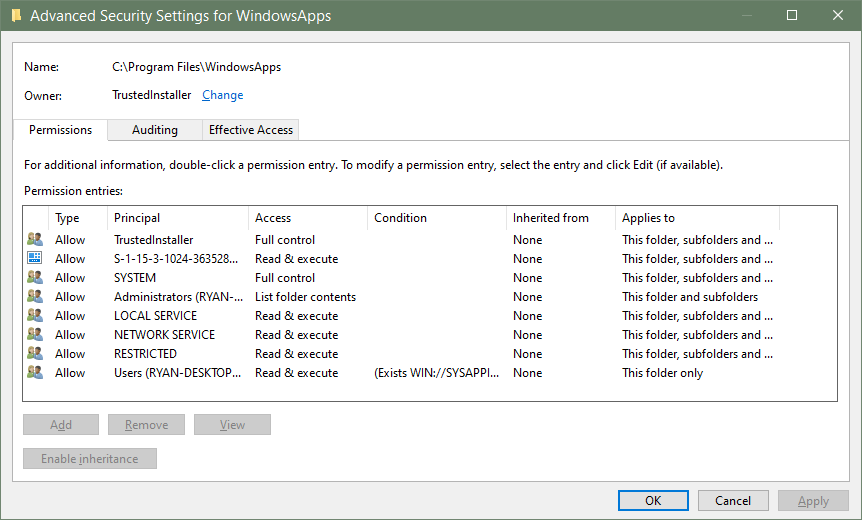 Interestingly it says that the “Users” group can read and execute files, as well as my specific user, but the Administrators group can only List folder contents for some hilariously unfathomable reason. And when trying to access the folder in File Explorer, it refuses to even show the folder contents, so there’s something fishy about that as well.

Interestingly, even though executing python in CMD works just fine, the “WindowsApps” folder does not show up when listing the files in the directory it resides in, and attempting to navigate into the folder generates a “Permission denied” error: 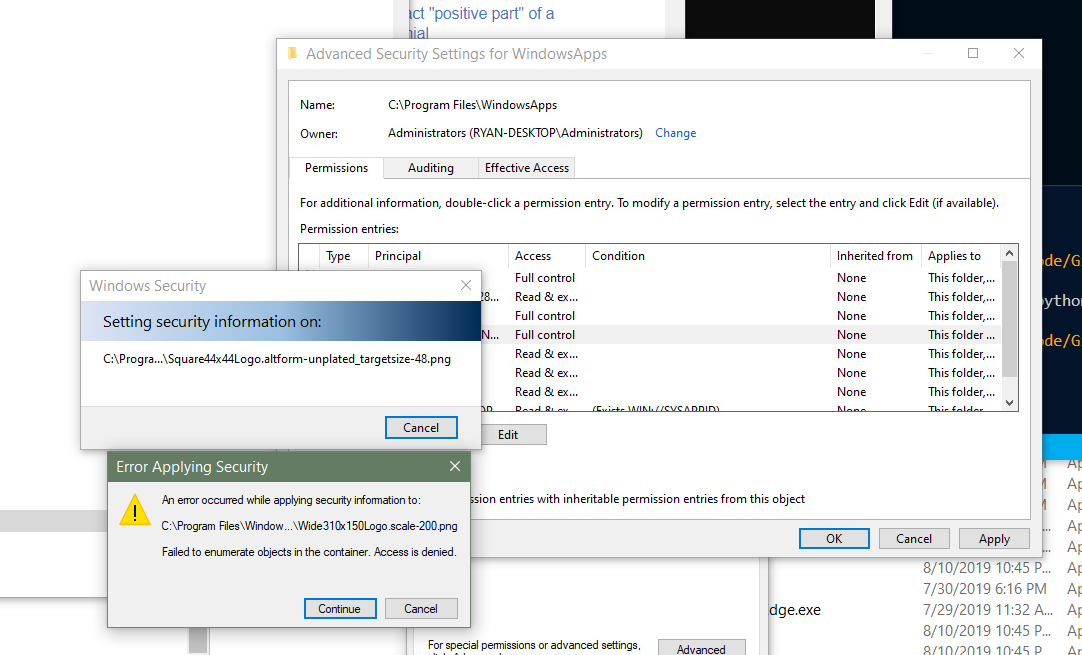 This permission error happened for so many files that I used Alt+C to quickly click “Continue” on repeat messages, but this still took too long, so I canceled the process, resulting in this warning message popping up:

And now I am unable to set the TrustedInstaller user back as the owner of the WindowsApps folder, because it doesn’t show up in the list of Users/Groups/Built-in security principles/Other objects. * 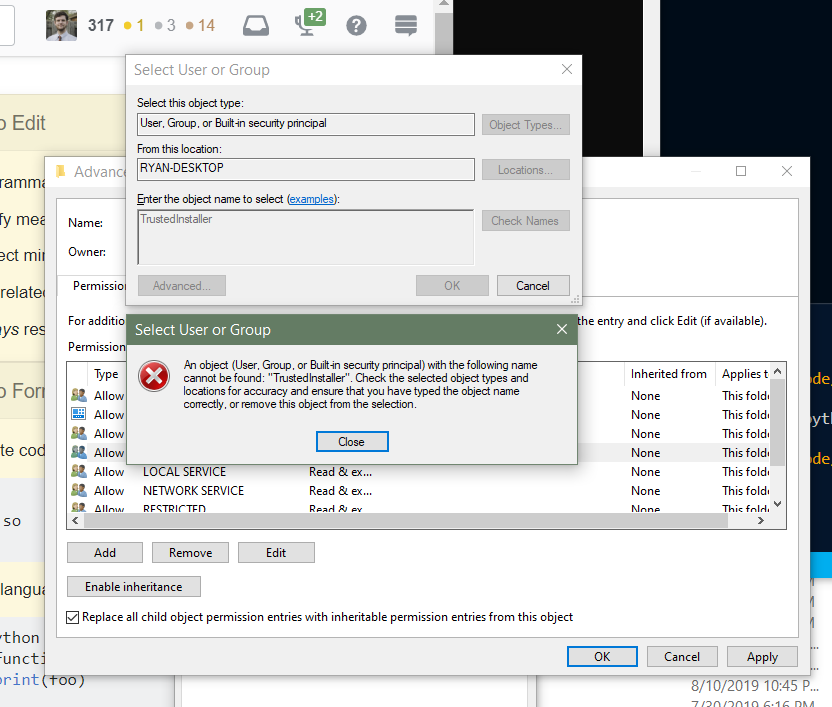 There is no solution. Basically, we are completely screwed. Classy move, Microsoft.

This appears to be a limitation in git-bash. The recommendation to use winpty python.exe worked for me. See Python not working in the command line of git bash for additional information.

save you time :
use wsl and vscode remote extension to properly work with python even with win10
and dont’t forget virtualenv!
useful https://linuxize.com/post/how-to-install-visual-studio-code-on-ubuntu-18-04/

Adding the Local Python Path before the WindowsApps resolved the problem.

This issue is far too common to still be persistent. And most answers and instructions fail to address it. Here’s what to do on Windows 10:

Workaround: If you have installed python from exe follow below steps.

This solved me the problem. 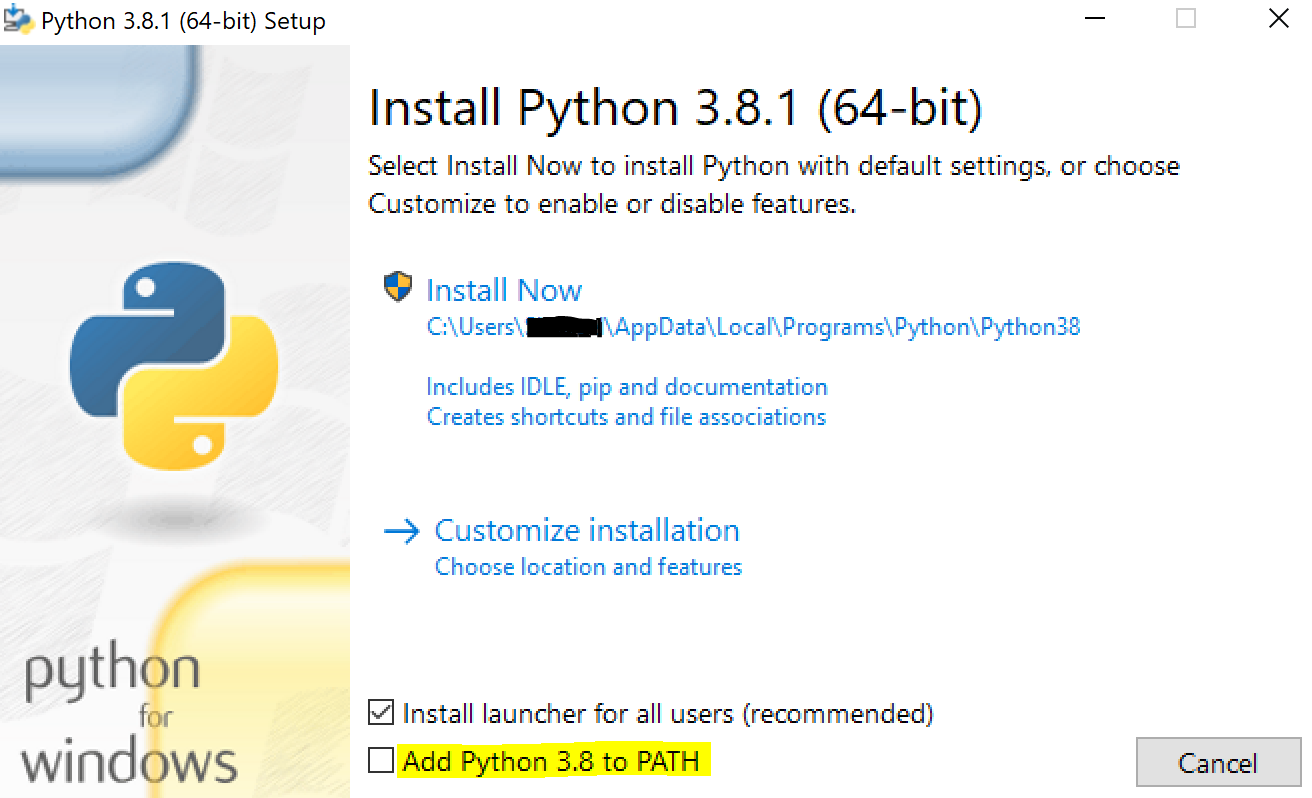 This is due to the way Windows App Execution Aliases work in Git-Bash.

As a workaround, you can alias to a function invocation that uses cmd.exe under the hood.

Add the following to your ~/.bashrc file::

For python, I’d recommend just toggling off app execution aliases as in the accepted answer, but for libraries that are distributed exclusively through the windows store like winget, this is your best option.

For me, I tried manage app execution aliases and got an error that python3 is not a command so for that, I used py instead of python3 and it worked

I experienced the same issue, but in addition to Python being blocked, all programs in the Scripts folder were too. The other answers about aliases, path and winpty didn’t help.

2.look for system variable section and find variable named path in it

3.double click on path and add new path which directs towards python folder and that’s it.

Simple answer: replace python with PY everything will work as expected

I had this to Run /execute but was not working

after reading and trying some of the solutions above and did not worked , what worked for me was

For people coming to this question wanting to use the Microsoft Store version of Python, and after the related "Manage app execution aliases" fix by @Zooba has likely happened, and are using Git for Windows git-bash (also known as BASH through msys2 mintty), the solution is likely simply to remember to make the call with winpty.’

However, if the system has had other versions of Python, make sure those copies have been removed (e.g. those installed from python.org) or are contained to their specific bundled application (e.g. OSGeo4W) (may require re-ordering environment variables).

Why, if winpty is forgotten, is it a permission error? For the first time it runs, the Microsoft Store stubs are conflicting with the permissions available to msys. A lot of the other answers go into the details of what is going on and why it feels weird. The short answer, is that the stub is trying to be a convenience short-cut to the Microsoft Store. If you launch it with winpty, it can do that. After that first time, it continues to need winpty for both related and unrelated reasons to the Microsoft Store.