I have a dataframe where the elements of a column are lists. There are no duplications of elements in a list. For example, a dataframe like the following:

The order of the rows of the output dataframe, nor the values inside a list is important.

I have found this answer, that shows how to tell if at least one item in list is contained in another list, e.g.

Returns True, since 2 is contained in both lists.

I have also found this useful answer that shows how to compare each row of a dataframe with each other. The answer applies a custom function to each row of the dataframe using a lambda.

However I’m not sure how to put this two things together, how to create the func method. Also I don’t know if this approach is even feasible since the resulting rows will probably be less than the ones of the original dataframe.

This is not straightforward. Merging lists has many pitfalls.

One solid approach is to use a specialized library, for example networkx to use a graph approach. You can generate successive edges and find the connected components.

Here is your graph: 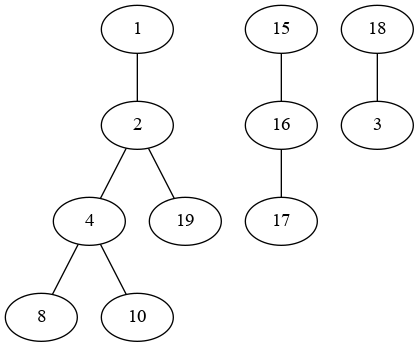 You can use networkx and graphs for that:

This is basically treating every number as a node, and whenever two number are in the same list then you connect them. Finally you find the connected components.

Seems more like a Python problem than pandas one, so here’s one attempt that checks every after list, merges (and removes) if intersecting:

at the end, vals is

if you don’t want vals modified, can chain .copy() for it.

To add on mozway‘s answer. It wasn’t clear from the question, but I also had rows with single-valued lists. This values aren’t clearly added to the graph when calling add_edges_from(zip(l, l[1:]), since l[1:] is empty. I solved it adding a singular node to the graph when encountering emtpy l[1:] lists. I leave the solution in case anyone needs it.