Can't import my own modules in Python

I’m having a hard time understanding how module importing works in Python (I’ve never done it in any other language before either).

Let’s say I have:

However, I’m definitely doing something wrong as Python can’t see that myapp is a module:

The function import looks for files into your PYTHONPATH env. variable and your local directory. So you can either put all your files in the same directory, or export the path typing into a terminal::

In your particular case it looks like you’re trying to import SomeObject from the myapp.py and TestCase.py scripts. From myapp.py, do

since it is in the same folder. For TestCase.py, do

However, this will work only if you are importing TestCase from the package. If you want to directly run python TestCase.py, you would have to mess with your path. This can be done within Python:

though that is generally not recommended.

In general, if you want other people to use your Python package, you should use distutils to create a setup script. That way, anyone can install your package easily using a command like python setup.py install and it will be available everywhere on their machine. If you’re serious about the package, you could even add it to the Python Package Index, PyPI.

exporting path is a good way. Another way is to add a .pth to your site-packages location.
On my mac my python keeps site-packages in /Library/Python shown below

I created a file called awesome.pth at /Library/Python/2.7/site-packages/awesome.pth and in the file put the following path that references my awesome modules

because your project name is the same as the myapp.py which makes it search the project document first

In your first myapp directory ,u can add a setup.py file and add two python code in setup.py

in your first myapp directory in commandline , use pip install -e . to install the package

In my case it was Windows vs Python surprise, despite Windows filenames are not case sensitive, Python import is. So if you have Stuff.py file you need to import this name as-is.

You need to have

in all the folders that have code you need to interact with.
You also need to specify the top folder name of your project in every import even if the file you tried to import is at the same level.

let’s say i write a module

we have to tell python where to look for the module. we have to add our path to the sys.path

we created our module, we informed python its path, now we should be able to import it

Executing the required file via module flag worked for me. Lets say we got a typical directory structure as below:

Now if you want to run a file inside a directory, that has imports from other modules, all you need to do is like below:

PS: You gotta use dot notation to refer the submodules(Files/scripts you want to execute). Also I used python3.9+. So I didnt require neither any init.py nor any sys path append statements.

This worked for me:

The . signifies that it will search any local modules from the parent module.

If you use Anaconda you can do:

from the Shell and it will write your path into a conda.pth file into the standard directory for 3rd party modules (site-packages in my case).

If you are using the IPython Console, make sure your IDE (e.g., spyder) is pointing to the right working directory (i.e., your project folder)

Besides the suggested solutions like the accepted answer, I had the same problem in Pycharm, and I didn’t want to modify imports like the relative addressing suggested above.

I finally found out that if I mark my src/ (root directory of my python codes) as the source in Interpreter settings, the issue will be resolved. 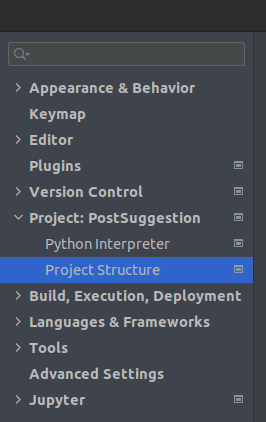 For a beginner trying to create modules via the def funcion for the first time, there is too much use of language that is meaningless or is made unintelligible by excessive use of technical terms. In Python, what does "(module) imported but unused" mean and how do I overcome this? Simple explanation with module name will be gratefully acknowledged or even a simple explanation via youtube will do. I am not likely to be employed as a programmer just a retired gentleman who is interested. Thank you all very much